After Lunar New Year, the real estate market of East Hanoi has been witnessing positive changes in both liquidity and selling price thanks to superior values in infrastructure and connection to the downtown.

From the perspective of investors, East Hanoi’s rising property value is inevitable, because the East is a highly potential one in comparison with other Capital’s sections, occupying an important location in connection with the North’s economic hubs such as Hai Duong, Hai Phong, Quang Ninh...

In fact, experts also forecasted its rapid growth in 2018-2020. Prof. Dang Hung Vo, Former Deputy Minister of the Ministry of Natural Resources and Environment even foresaw that East Hanoi shall become the “hot” spot in real estate investment in 2018- 2019. He cited the generous land budget, increasingly complete infrastructure, and especially the emergence of “giants” as the foundation for the the boom of some real estate market in some parts of East Hanoi in 2019.

“According to the law of the nature, the expansion and development to the East is reasonable but the expansion and development to the West of the Capital City is a mistake,” he stressed. “East Hanoi, where such areas as Gia Lam, Yen Vien, Long Bien or Dong Anh have both mountains and rivers shall not be threatened by the flood, and shall have the chance to out-develop the West according to feng shui.”

From the author’s own survey, it seemed that right after Lunar New Year, land and house market in such locations as Bo De, Thach Ban, or Cu Khoi... were already quite “hot”. Residential land prices at all real estate exchange increased by 3-5%.

Even the tenement apartment price at various locations in Long Bien, Gia Lam prepared for a VND 3-5 millions/m2 increase compared to pre-Tet.

At farther locations, such as Trau Quy Town, the land price is at VND 20-27 millions/m2, VND 3-5 millions/m2 higher than that at the same period last year. Similarly, Bat Trang, Dong Du, Co Bi, Kieu Ky... has witnessed a 2-7% increase in price.

“The increase in Long Bien or Gia Lam land price was forecasted”, a representative from a real estate exchange on Nguyen Van Cu Street remarked. “Even Dong Anh, after the proposal to the District level, attracted a great number of investors from all over the city flooding in to hunt street-facing, alley-facing, villa and townhouse slots, pushing the price surge further.”

The attractiveness of project houses and lands

Residential land price in Long Bien and Gia Lam witnessed a sudden surge but suffered from a low number of successful transactions due to the lack of supply and the low number of sellers. Therefore, people with the demand for house-for-live buying there or personal investors are forced to shift their attention to another sector: planned lands and houses in projects.

In fact, townhouses and villas in these projects, despite bearing a slightly higher price than residential lands sold by people, get to enjoy a complete and systematically planning infrastructure.

Let’s single out Elegant Park Villa as an example. The project, right at the moment it was launched by MIKGroup at Thach Ban, Long Bien, with its structure following neoclassical European architectural style, attracted tremendous attentions from the investors and people with house-for-live demand. 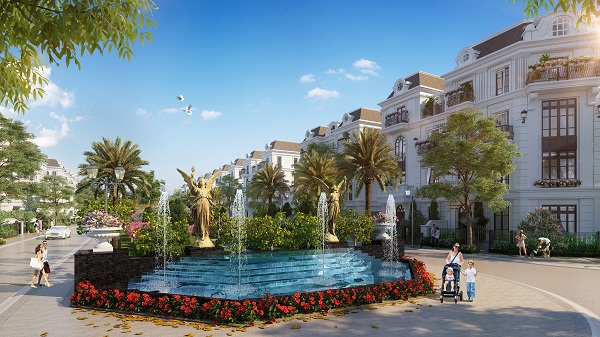 In the context of limited supply, occupying a premium location right at the center of Thach Ban, Elegant Park Villa, the 78,914m2 project with 86 villas and townhouses, immediately became the center of market attention when it was launched. Moreover, Elegant Park Villa is completely surrounded by a vast space with 5 over-20ha natural lakes creating a living space of tranquility.

According to MIKGroup’s representative, the reason the Group chose Thach Ban as the place for a low-rise building project was that its rapid traffic and social infrastructure development was foreseen. Besides, thanks to its role as Hanoi’s East entry, Long Bien, Gia Lam possess easy access to not only neighboring sections but also Hanoi’s downtown.

However, the most treasured value of Long Bien, in comparison with other urban areas lies in its living space and environment still being an ideal choice for those who love living in unpolluted air.

Mr. Nguyen Van Thoai, Director of An Cu Real Estate Exchange (Long Bien), said that right after the end of Lunar New Year, both big and small investors was busyhunting for land and villa slot in the central Long Bien and Gia Lam. The number of successful transactions via this exchange is 10-15% higher than pre-Tet.

“A lot of projects have their products launched right before and after the Lunar New Year, however, their limited slot forced big-budget investors to buy and this is the time for them to sell at 10-20% higher price. Some projects sold by their own investors also have significantly higher price than their first sale,” Mr. Thoai remarked.

The expert also commented that, in near future, project house and land prices in Long Bien may still be pushed higher but buyers must carefully study products of their choice, their project progress, their investors’ capability and credit to avoid any inconveniences later on